A lot of photographers obsess about their gears. What features their cameras have or not have? How does it compares to another model/make? Which lens is sharper/better than another? A healthy understanding of the capability of the gear you own is crucial to capturing the image you want. But if the pursuit of understanding the gear gets beyond that and it becomes feature-matrix obsession, it is very easy to forget about the point of photography which is to make great photos. 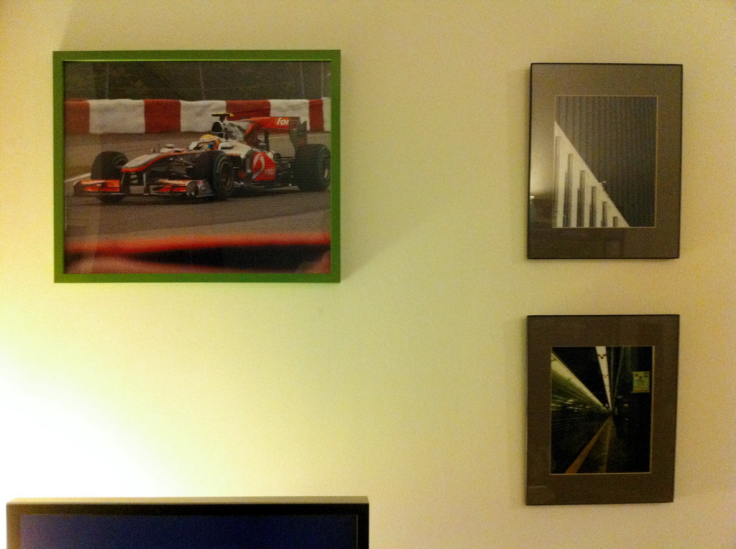 I’ve just hanged up a 16″ x 20″ print of a photo of Lewis Hamilton in the McLaren F1 car. It looks great, doesn’t it? The photo captures the dynamic motion of the car as well as Hamilton working with the steering wheel. Do I buy this from the merchandise stand at the track?

You may be surprised that it was I who took the photo at the Canadian F1 race in Montreal last month. Did I have professional camera gears when I snapped that photo? No. Did I have track side access like the pros to get that angle? No.

What I have is a Canon 50D with 28-135mm IS lens. Pretty ‘average’ gear, even compares to a lot of other photographers there at the race, let alone the pros.

Here is the original photo: And the site where it was taken. Notice I was actually behind the chain fence and had to shoot through the gap that the pros left for us (how generous of them, not). 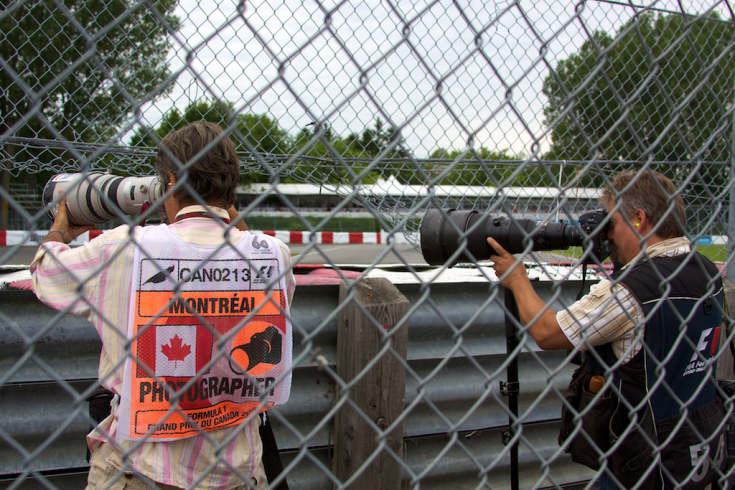 So what techniques did I employ to help me take that photo?

First, I use the Shutter Priority mode on the camera and set it to 1/1600 second. This will capture a sharp image despite the car travels between 75-60 mph at that point.

Second, knowing that my lens is pretty ‘slow’ at the long end (f5.6 at 135mm) I utilized the auto ISO feature on the 50D so I won’t have to worry about constantly adjusting the ISO setting to ensure a good exposure at the required shutter speed/aperture settings.

Third, the focusing speed of my lens is decent but won’t be able to keep up with a fast moving object like a F1 car. So I switched to manual focus and then aimed the center focusing point to a location on the track where it is approximately the same distance to my camera as the car would be when I snapped the shutter button. Couple this with the relatively high f-stop, this make sure the majority of the car would be in sharp focus.

Forth, I set the continuous drive on the camera to High (on the 50D, this gives me 6 fps) so there would be plenty of photos captured. This would allow me to pick the best ones from a large sample.

Finally, having setup the gears this way I used the giant TV to track which car was approaching the corner and then tracked the car through the turn using the view finder until it arrived just slightly before my pre-focused location. I then triggered the shutter button and took a series of photos while continued keeping the car in the view finder. After about 30 minutes I took about 180+ photos of various cars through that turn at the circuit and ended up with about 6 excellent photos. All of them are poster quality.

Would I take better photos if I have better gear?

If I have my 70-200mm f4 L lens with me, then I would be able to use larger aperture which means capturing more lights. This will allow the camera to use lower ISO settings and translate to less noise in the final image. I’d also have tighter crop as I can zoom to 200mm, and therefore less cropping for the final print. The 70-200mm lens is also noticeably sharper and produce image that has higher contrast.

If I have better camera body such as the 5D MkII, I would have better sensor (larger and more sensitive) to capture the image. I would also have much faster and more accurate auto focusing so I may be able to auto focus instead of pre-focusing. This may product a sharper image as there would be less guess-work.

But none of that matter when I was at the track. I worked with what I had instead of bemoaning what I didn’t have. Some lateral thinking (getting into a good location) and understanding the limitation of my camera gears (slower f-stops, pre-focusing, etc.) means I can still capture images that are good enough to hang on the wall, which is after all, the goal of photography.

The rest of my Canadian GP photos are on Flickr.