Baxter and Nemo, the keys to speak in the daily stand up meetings. 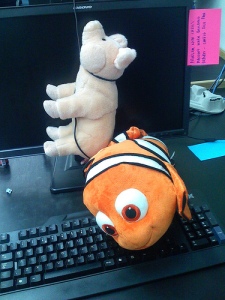 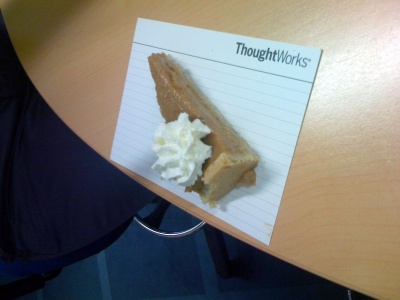 Congratulation to Al Gore for winning the Nobel Peace Prize for his work on the climate changes. Apple pays tribute to its board member. (Don't think I've forgiven you over the iPhone update debacle yet, Apple. I have not!)

I don't miss much of the UK but one thing I do miss is the driving. It is quite sad that even a mid-range MPV (mini-van in American speak) handles and drives better than the so-called sports car in America. This weekend I've rented online a compact car and when I got to the rental place I was given a Vauxhall Zafira to my dismay. A people carrier!? WTF? An automatic one, no less! But once I've started driving it both in London as well as on the motorway, I was pretty impressed. The 2.2 litre direct injection engine (150 bhp, 215 lb/ft) gives the car pretty good pick up and I was able to comfortably and safely fly along M40 around 85-95 mph. The 'sport' mode turns the automatic gearbox into more manual like; holds longer on gear, harder gear changes to get more torque and power. The chassis, despite its large size and heavy weight, proves to be very stable and responsive. The power steering is just right, not light and devoid of feels like almost all the American cars I've driven. I was able to drive through the windy country roads between Birmingham and Bridgnorth in high speed (~60-70 mph) with confidence, whereas I was actually scare just to take a simple gentle turns on a Highway with the Chrysler 300C around 65 mph!

And finally, to all you Americans out there, traveling on a straight and wide highway at 75 mph is not fast. In fact, if you are doing that speed on M40 last night, you would see me (and many others) speeding past on your right! I feel like I was driving for real last night when I was not the only person who was traveling faster than 85 mph for most of the journey.

Now if only I can have a week full of driving around the UK in a real sports car, like Audi TT, Mercedes SLK, Lotus Elise, etc…

It's been a week and a half since I've joined a ThoughtWorks project in London. It's been such a refreshing change. The whole team lives and breathes Agile. The code base is not the cleanest I've worked on but actually easier to work with because the team made sensible compromises and did not being stubborn about ideas or patterns. (Actually we still have some way to go on the Mingle front, but that's another story.) We are doing TDD, continuous integration, pair programming with regular rotation, 9-5:30 hours, everyone are treated as equal, basically the whole nine yards! I can foresee the next three months will just disappear quickly. You know what they say, time flies by when you are having fun…

As for London itself, I was pleasantly surprised by all the good/new stuff they have. But at the same time, the Tube still pisses me off, with the never ending tunnels and the asinine system of having to swipe your ticket/card on exit. At least the travel cost is paid for by my company!

I'm going up to Shropshire this weekend to visit my parents. Instead of taking a 2+ hours train ride, I'll be driving a rental car up. I know, it's not environmentally friendly but consider the total amount of driving I haven't done in the last 7 years, I think I can take this carbon emission hit.