Last Tuesday I travelled down to Philadelphia to speak at the Philly ALT.NET meeting. Brian Donahue, the group organiser, invited me to talk about my experience of developing iPhone application from a .NET perspective. Over 20 people turned up and I was surprised that most of them already owned an iPhone and a Mac (remember this is a .NET group afterall). 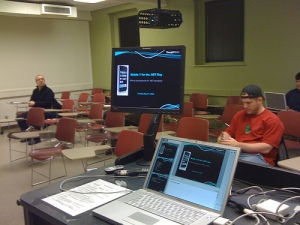 Waiting for people to fill in for Philly Alt.NET presentation
I began with listing out the things require for iPhone development (hardware and software), then moved onto comparing Objective-C/Xcode with C#/Visual Studio. I showed a quick code demo to illustrate my points on language and environment differences. Finally I talked about the good, bad, and ugly things I feel about iPhone development up to this point.
This is the first time I gave this talk and feel the Philly audience got good value from my experience. The event was hosted at Drexel University campus and a few of the iSchool students were in the audience. One of them even came up to me afterward and asked whether I’d be interested in doing more talks on iPhone development for iSchool!
Here are the slides I presented:
One of the attendee also took some videos and I’ll post them as soon as I receive the link.

Last Wednesday's NY Alt.NET meeting topic was Continuous Integration. Being a ThoughtWorker and had worked on build and deployment project at an enterprise level, it fells naturally to me to not only prepare the presentation material but also present it.

I was a bit nervous about the presentation, as it has been a while (over a year) since I last stood up in a group setting and presented. But I think it went fine, though of course there are always improvement to be made.
I also have the honour of speaking at Philly Alt.NET meeting on May 5th. The topic is on iPhone development for .NET developer. It is something completely different and still pretty new to me.

Like Loading...
April 27, 2009 0
Couple of weekends ago, I was at Redmond for the Alt.NET Seattle conference. As this was my second time there, I was no longer a Open Space/Alt.NET virgin. Just like last year, an amazing amount of discussions were packed into two full days. It was very difficult to pick which sessions to attend, having to decide whether to sit in a technical discussion or a meta-discussion. But with so many people recording videos, it is almost possible to not miss anything. We are not quiet there yet, but I am sure in the future every session would be recorded/streamed in some manner.
Ward Cunningham Keynote
Ward Cunningham showed us the work he did during his time with the Eclipse project on unit testing on a new level of complexity. He calls it SWIM and was implemented in PHP/HTML/CSS/JavaScript. He proposed to start a new open source project to implement the same concept in .NET. This create enough interest to spawn off a separate session later this weekend. (The test case runner was provisionally named Swim Runner. Personally I think it should be named Swimmer!)
Encouraging Open Source in .NET
Last year in Seattle, a similar session was convened to discuss how to create more buzz and interest in open source projects in .Net space. This year’s session centered around how we can get more open source projects to start, worked on, and succeed. Scott Hanselman hosted this session and asked what the community can do. Should Microsoft give Oren Eini a mail-order bride so he can finish LINQ-to-NHibernate? (Joke) What about OSS projects adaption by VB.NET developers?
.NET/Mono on Mac, Linux, and iPhone
Miguel de Icaza of the Mono Project hosted the session. He showed us the tooling and technique to develop iPhone app/game using the Mono stack on the Mac. He also demonstrated autogeneration of linux bootable image with pre-configured apps. (Side observation #1: only a few people at last year Alt.NET Seattle had iPhones, this year very few people has phones that *isn’t* an iPhone. Since this year’s event was just before MVP Summit, there are lots of MVPs there with iPhones! Just to show loyalty does not lie with brand but usability! #2: Less than 1/3 of attendees aware of Twitter last year, this year, very few are *not* on Twitter.)
Why so mean?
Hosted by Scott Hanselman. We explored why there is an perception of elitism in the software developer community. Why C# developers talk down to VB.NET developers, why average Microsoft developers are dimmed un-savable. This discussion led to a new session on Sunday about teaching, ALT.NET Pedagogy.
Oxite Retrospective #2
When the Oxite project (a sample blogging engine created using ASP.NET MVC framework) was put up on CodePlex, it created a huge controversy in the Alt.NET community. This is the second part of the retrospective on the project and the aftermath. One of the Oxite team member from Microsoft joined us on Sunday and gave his point of view from the inside.
When to use F#?
With F# being the first class language within the Visual Studio ecosystem, functional programming is gathering more interest. When is functional programming be appropriate for a .NET project? What type of problem would it solve better than plain old C#/VB.NET? Why not just use F# for everything?
Abstract Test Assertions
The ASP.NET MVC Contrib project relies heavily, of course, on TDD. An interesting problem arise when contributors want to develop using different unit testing framework. This session explored the idea of abstracting test assertions so that any frameworks can be used for the project, and what technique should be employed to achieve that.
I’ve recorded all these sessions on video for those who couldn’t attend. Scott Hanselman also streamed live via Kyte.tv for a number of sessions. My videos can be viewed on Vimeo, with the rest of video links on the Alt.NET wiki.

Like Loading...
March 12, 2009 0
Tonight was the first NY ALT.NET meetup and I think it has gone very well. Over 30 people turned up and many have not participated in a fishbowl style discussion before. Stephen Bohlen first gave a quick, 10 minutes, overview of OR/M. Then after a quick pizza break Don Demsak, Stephen Bohlen, and Mark Pollack kicked off the discussion and soon more people joined in the fishbowl experience. After the meeting, I talked to a few attendees and all of them gave very favorable feedback about this more interactive style of meetup, verses the traditional presentation by a speaker style.
On the technical side, we decided to stream the video live after we received a few requests from people who couldn't attend in person. The logistic of setting a stream up using Ustream.tv is trivia but there are a huge amount of fingercrossing and wood touching because everything had to come together at the same time:
Having said that, I can't imagine streaming live video on the internet to the public 5 years ago (or even 2!) without huge infrastructure expense, lots of testings, and poor results. Now, it is free, easy to setup, and provide great user experience.
Here is Stephen Bohlen gave an overview of OR/M before the main discussion (~10 mins):
The main discussion (~1 hr 47 mins):

A group of like minded .Net developer and I have started a local ALT.NET user group for the NYC area. Our first meeting will be held on Thursday, September 25th, 6:30 PM at the Microsoft office in midtown Manhattan.

The topic for the first meeting is: Object-Relational Mapping: the philosophies and the tools. More details can be found on our user group web site: http://nyalt.net/ or you can RSVP directly on the meetup.com page.