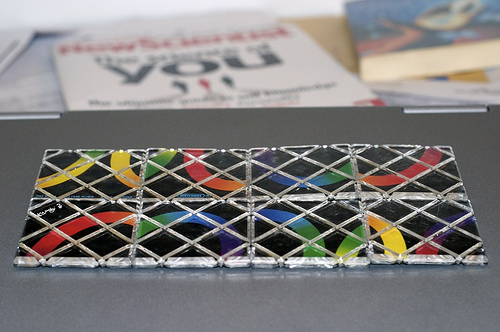 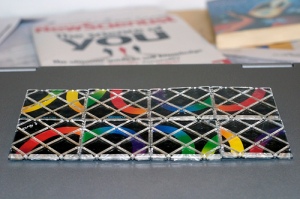 When eiron and I got back from watching the World Trade Center in the cinema this Sunday, we picked up a package delivered the day before. Leah was puzzled because she was not expecting any delivery but I kind of half expecting something. I did not expect it to arrive this fast though.

About an hour later, after we've both checked our emails, surf the web, check RSS feeds, etc. I finally got around to open the package. As I suspected, it was the Rubik's Magic I bought on eBay a few days ago. Leah was confused as to why I would buy it but it definitely brings back memory for her, especially because she had never solved it, whereas I bought it because I did solve it and want to do it again. When I was a kid playing this thing, I was able to solve the puzzle in 7 (8?) steps within 5 seconds.

It arrived in the initial state but within a few minutes of manipulation from me, it was already in a weird configuration. It took me awhile before I put it back to a decent 4×2 configuration and by then I got a headache. I told Leah about the headache and then I remembered that it used to give me headaches too all those years ago.

Leah summed it up nicely, "So you bought a headache inducer from eBay for 8 bucks?"

P.S. I am going to order Rubik's Cube from Amazon. This I never solved so I don't think I'll have any luck this time round either!